How Effective are Incentives for Online Card Sorting?

Unmoderated card sorting tools are a great way to reach a large number of geographically dispersed participants for your card sorting study. With mass emails you can reach a large number of potential participants, but the challenge is getting people to participate in the study. Unfortunately, few people actually open and read these emails, and even fewer take the time to participate in the study. 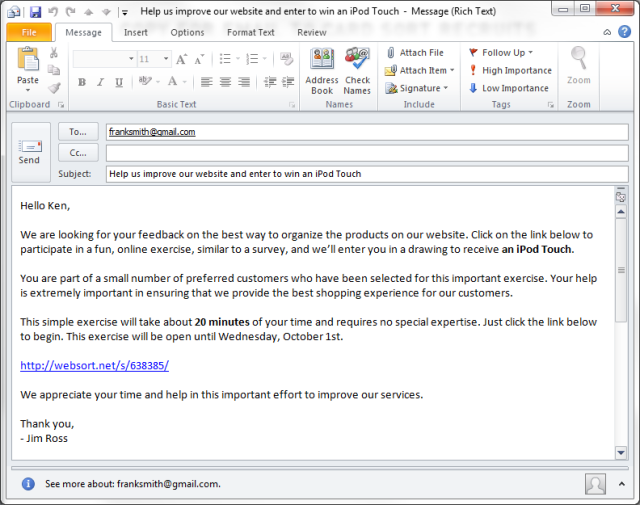 How do you motivate people to participate?

So how do you motivate people to participate in Web-based card sorting or another type of unmoderated, remote user research study? Incentives! But what type of incentive works best for a mass audience? You can give an incentive to each participant, but with a large number of participants that can be very expensive. And if you give each participant a small incentive of say $5.00, how motivating is that?

A common alternative is using a sweepstakes-style drawing. One of the participants out of hundreds will get a gift card or other incentive. But how effective is this sweepstakes-style incentive in increasing the number of participants? Does it affect the quality of the results by encouraging those who are only interested in the incentive and not in completing the study seriously?  Can you motivate people to participate in a study without any incentive? What are the other variables that affect participation?

We sought to answer these questions through a recent card sorting study for an ecommerce client. As part of a website redesign, we were reorganizing the products in their store. Customers of this company pay a membership fee to join and are required to purchase a certain amount of products per month. So they have a closer connection to the company than the average business-consumer relationship.

From previous studies we found that, without a facilitator, it can be difficult to get people to spend 20 minutes thoughtfully working on an Web-based card sorting study. On some projects we have offered incentives and this has seemed to increase the number of participants. On other projects, our clients have refused to offer incentives and we have had fewer participants who were motivated to work on the study “out of the kindness of their hearts”.

So for our recent ecommerce client, we recommended entering the participants in a drawing for an iPod. For the modest cost of about $300, we could possibly get hundreds of participants.

Do incentives draw in the wrong element?

Our client did not object to the cost, but was concerned about the possible negative effect that an incentive might have on the data. They worried that some people might be motivated solely by the desire to get the incentive and might not take the time or effort to complete the study thoughtfully. This is something we never considered previously. Our client felt that their customers would participate in the study out of their strong affiliation and desire to help the company.

Let’s find out with two studies!

Although we, and probably many others, have done Web-based card sorting studies with and without incentives, and observed the difference in the number of participants, we had never done two identical studies to determine the effects of an incentive. In those previous studies, various other factors could have contributed to the difference in the number of participants, including the characteristics of the audience, the type of incentive, the ease or difficulty in completing the study, the credibility of the company with the audience, and the existing communication relationship between the company and the potential participants. Our two identical studies would eliminate those variables to see the true effect of the incentive.

From our client’s customer database, we carefully selected two representative samples of 5,000 customers each. We carefully wrote an email for each study. These emails were nearly identical except the incentive study also highlighted the incentive in the subject line and in the body of the email. Both emails also attempted to stress the importance of receiving customer input into the design of the site. We explained how their help would create a better shopping experience for all customers. And we set the expectation that it would be a fun exercise that should take about 20 minutes.

Both open card sort studies contained the same 60 cards with names of common, household products. The brand names of these products were made generic through an exercise in earlier focus groups. With a limit of 60 cards and the use of everyday, understandable products, we felt that this would not be a difficult study to complete.

The study ran for six days, with emails sent initially on a Thursday, with a reminder email on the following Monday. The study was ended on the next Wednesday morning.

The incentive was persuasive.

Although the incentive was more persuasive than not offering an incentive, there were more than enough customers willing to help improve the customer experience without any incentive. 187 participants were far more than what was needed. In this case, the commitment of the customers to the company was enough to provide willing and motivated participants.

The incentive didn’t cause people to take the study less seriously.

We did find five participants in the incentive study (1.45%) and one (0.53%) in the non-incentive study who did not complete the study correctly. Some did not sort or name any items and just submitted their results, or they sorted a few items and then submitted their results without sorting the rest. These may have been legitimate errors, they may have been people who just gave up, or they may have been people intentionally trying to enter the study without doing the sorting. The card sorting software allowed us to identify and delete these participants from the results.But did the incentive attract participants who were just interested in winning the iPod and who did not take the study seriously? To determine this we looked very carefully at the category names created by each participant in both studies and noted any oddities. An equal number of participants in both studies did not name any of their categories. We looked at these results and found that most of these people did carefully sort the items into logical categories. These people either did not realize that they needed to name categories, or they could not figure out how to name them. We realized that the card sorting software did not provide a warning to participants that they had not named any categories.

The categorization of cards in each study was virtually identical, as one would expect from large samples of an identical audience, according to Tullis and Wood’s study.

With virtually identical results, such a slight difference between the number of people who did not correctly complete the study, and with the fact that nearly all the participants in both studies did carefully complete the sorting, we can conclude that the incentive did not affect the quality of the study data.

Web-based research methods, such as card sorting, provide the ability to reach a large number of participants, but convincing them to participate is the first hurdle. With these tips, you’ll have more and better participation in your research study.

Tullis, Tom and Wood, Larry. “How Many Users are Enough for a Card-Sorting Study?” UPA 2004 Proceedings.